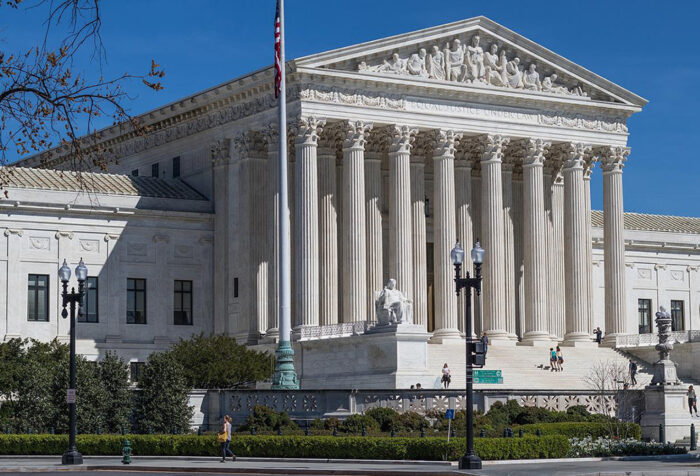 The US Supreme Court’s decision in July to overturn Roe v. Wade, the long-standing landmark ruling that declared abortion a constitutional right, will create innumerable lasting negative effects for women’s health and families, and will push back decades of societal progress toward equity, according to members of Emerson’s community.

“This ruling will exacerbate the systemic inequalities our country is already experiencing in terms of health and access to healthcare, causing long-term and pervasive impacts on women and families,” said Robin Danzak, associate professor of Communication Sciences and Disorders, (photo below), who teaches an interdisciplinary undergraduate course in Arts, Health, and Community.

Danzak said women who have the means to pay for abortions and time to travel will be able to access them in states that maintain reproductive rights. And for those who don’t, they will be forced to give birth, regardless of their circumstances.

“Accessible reproductive health care, including abortion, is essential for promoting positive health outcomes, health equity, and social equity,” said Kathryn Hall, MA ’08, deputy director of the Boston Public Health Commission. “Anti-abortion restrictions not only prevent people from getting care, but they also target the most vulnerable among us, in particular those who are low-income.”

“Forcing women to carry and give birth to unwanted children not only creates physical and mental health risks, but also increases the chances they and their children will experience poverty and its long-lasting consequences,” said Danzak. “This is a devastating ruling and a very dark day in the USA.”

Danzak pointed to the multi-year Advancing New Standards in Reproductive Health (ANSIRH) Turnaway Study, which showed that the denial of an abortion results in worse financial, health, and family outcomes. ANSIRH, which is based at the University of California, San Francisco, is a research program that investigates reproductive health, rights, and access.

Nancy Allen, a senior executive-in-residence in the Marlboro Institute for Liberal Arts and Interdisciplinary Studies at Emerson, (left) has worked in the fields of communication and public health, and developed social marketing campaigns and promotional materials on public health topics, including teen health and sexual health. She believes the recent Supreme Court ruling will be far-reaching in scope for women.

While access to reproductive healthcare is the most glaring impact of the decision, there will also be a huge societal impact. Hall emphasized that the decision will drastically undermine gender equity, social equity, and erase decades of public health progress.

“This is not about abortion; it’s about a worldview of enforcing traditional gender roles and procreative sex within marriage,” said Allen.

Tim Stanley ’89, vice president of public affairs for Planned Parenthood North Central States and treasurer of the Emerson Alumni Board, said of the five states in his region, three (Minnesota, Iowa, Nebraska) still offer abortion, and two (North Dakota, South Dakota) have prohibited it. Wisconsin, which is contiguous with this region, has also banned the procedure.

Stanley said his organization has been planning for months to deal with the fallout of the anticipated decision, including preparing for an influx of patients from states that suddenly no longer offer abortion services. But he worries that even after haven states hire more staff, providers won’t initially be able to keep up with demand.

All told, Planned Parenthood expects there to be 26 states where abortion will no longer be legal, a fact that will contribute to maternal mortality rates in a nation that already has a “shameful” track record of maternal mortality among industrialized countries, he said.

“The damage that will be done [by this decision] is so vast that it’s hard to find the words to describe what it means, in both an actual physical sense, as well as morally,” Stanley said. “People will be hurt; they will die. Children will lose their mothers.”

Stanley said the Supreme Court has “brought a sledgehammer down” on women’s freedom, but he believes there will be a reckoning.

“We…must strengthen our social safety net. The same politicians who are intent on stripping away our abortion rights have, for too long, gotten away with turning their back on providing affordable health care, day care, paid family leave, birth control, and so on,” Stanley said. “From this moment on, their immoral hypocrisy will not be tolerated, and in November, voters will bring their own sledgehammer to the election.”

Associate Professor Nelli Sargsyan, an anthropologist in the Marlboro Institute who studies feminist consciousness and collective care through things like street actions and public performance, said that though the overturning of Roe has been in the works for a long time, via grassroots organizing and conservative judicial appointments, those who support reproductive justice are not without recourse.

The overturning of Roe v. Wade affects every member of society on some level, even if it most directly affects those with uteruses, she said.

“So, I want to ask, how does this decision affect the consciousness of those of us without uteruses and/or with racial and class affordances? And what are those of us in these categories doing about it?”

Erin Clossey contributed to this story.