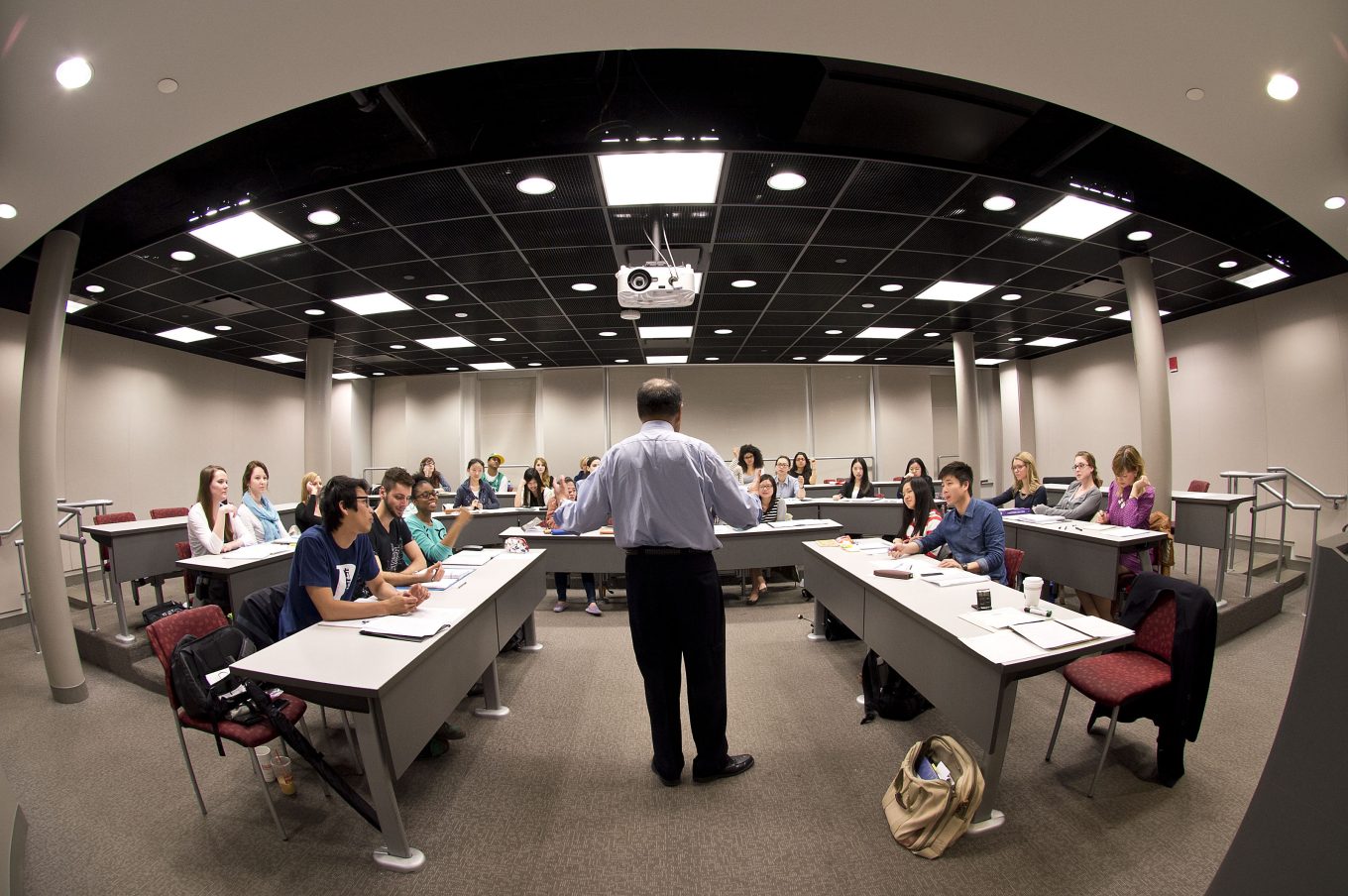 Above: A faculty member gives a lecture. | Photo by Derek Palmer

Last issue, we asked: Who is your favorite Emerson professor? We shouldn’t have been surprised that the question would elicit so many impassioned responses!

Thank you for providing the opportunity to share my long-held affection for my favorite Emerson professor, Dr. Charlotte Lindgren.

My favorite professor at Emerson was, without a doubt, Ted Hollingsworth. I was a master’s student in the Department of Communication Studies during the ’90s, and he was the first professor in my academic career who showed me why you need to read content from “both sides” of an argument. He taught us that in order to debate or negotiate effectively, we needed to understand viewpoints that were different from our own. If we subscribed to liberal papers, he suggested we also look at the conservative ones.

I will never forget a specific case study that Professor Hollingsworth assigned to our class about the defective O-rings in the Challenger spacecraft that resulted in the deaths of astronauts. His point was that this was a communication failure because the higher-ups wouldn’t listen to the workers’ warnings, and that org charts don’t necessarily reflect how an institution actually functions internally. And, although thankfully most people don’t work in a business where the stakes are so high, it did emphasize for me the importance of adopting effective communications techniques at work, and in life.

I learned so much from Professor Hollingsworth—his class was the best part of my Emerson experience, and I am so glad that I finally have the forum to tell this story and how much his teachings meant to me!

While I first thought this to be a simple question, I soon realized that it was impossible to answer. During my years at the College—1964 to 1968—Speech was taught by “Mama” Mitchell, Ken Crannell, Walt Littlefield, Haig der Marderosian, Vito Silvestri, Arlyne Garrity, and John Zacharis (among others). My own department—Theatre—featured Leo Nickole, William Danford, Alfred Sensenbach, Tom Haas, Harry Morgan, and Lenny Riendeau. Given these names, I find it very difficult to choose a favorite professor. Why? Because the faculty of each department functioned as a well-practiced Super Bowl–winning team. Rather than contradict each other or sow confusion in the minds of students, they complemented and dove-tailed upon one another to teach and present a consistent philosophy of the subject at hand. It is for this reason that I found it a “breeze” to earn a master’s degree in theatre from a large Midwestern university.

Now that I’ve retired from my 36-year career at WBZ and CBS, I can recognize some of the junctures in my life that led me on the right path to future professional success. My freshman and sophomore classes with Emerson professor June Hamblin Mitchell are right up there on that list. Back in 1968,when I entered my first Voice & Articulation class with “Mama Mitchell,” she embraced each of us immediately with a sense of safety but an atmosphere of serious authority—making it clear that she would challenge us. After one class, she told me sternly, “Mr. Silva, unless you learn to correctly embrace the letters ‘L’ and ‘A’ professionally, you will never graduate from this institution! Get down to the Voice Lab immediately!” Shaken but determined, I did just that—recognizing the immediacy of my need but also, to my surprise, the presence of Professor Mitchell, who would personally guide me along that rocky path to forever change the way I understood the spoken word. Professor Mitchell was a deeply gifted orator and teacher who imbued her love of effective and artful communication in each of her students.

I owe everything to Dr. Stuart Postle, Gerald Kroeger, and Ken Crannell. Sorry, I could not come up with just one!

I’m sure I will be in plenty of company when I say it was Sam Cornish.

Hands down, it’s Fran LaShoto. She was demanding, effective, precise, and motivating. She knew her craft and knew her students. I know she trained many in the local media and government and was even a speech coach for Michael Dukakis to prepare him for his campaign for President in 1988.

My favorite professor was Robert Peditt, a music teacher. He had such a love for classical music and shared his enthusiasm for it, which I found wonderful.

The late Paul Erickson was my favorite. He was seemingly casual, suggesting you could call him Paul or Pablo or whatever. But make no mistake about it—he was knowledgeable and always willing to lend an ear. I remember having to work late and requesting to fax (!) my assignment in—faxing being state of the art in 1995. He always said yes, knowing I worked full-time in addition to being in the master’s program at night.

I admit now that “working late” was a euphemism for meeting friends for a glass of wine at Maison Robert, coincidentally where I met my husband my last semester at Emerson. I’m sure Paul would approve!

My favorite Emerson professor was John Coffee. He had a way of telling historical stories with details that would draw you in. I enjoyed attending his classes, and he piqued my interest in the current topics. At times, he liked to go into gory details. It was sad to learn of his passing [in 2012], because he had a real knack for the art of teaching.

What was your favorite Emerson class, and why?
Write to us!