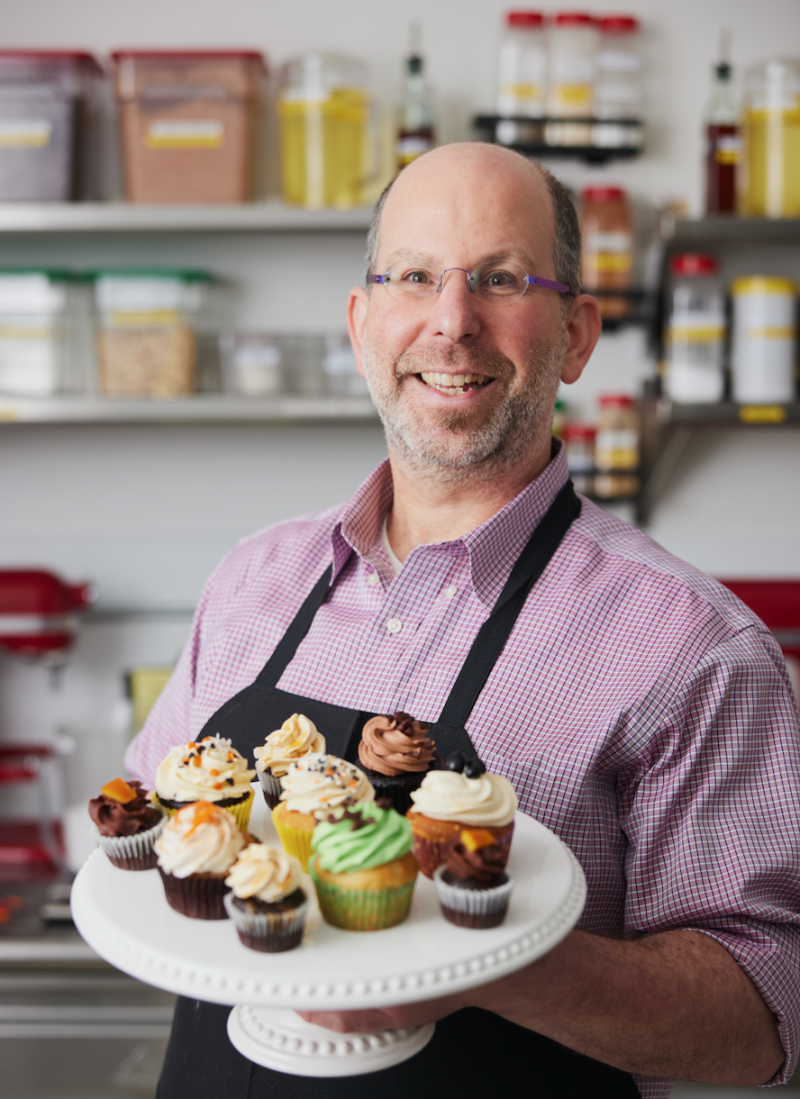 Rik Lemoncello, MSSp ’99, is a cake baker without a sweet tooth. What he loves best about creating sugary confections isn’t eating them—it’s sharing them with others.

That might explain how the speech-language pathologist (SLP) and college professor came to share his longtime hobby with adults living with acquired brain injury (ABI), through a social enterprise bakery that allows clients to learn practical skills, practice holding down a job, and gain confidence in a supportive and social environment.

Sarah Bellum’s (get it?) Bakery & Workshop, in the Multnomah Village neighborhood of Portland, OR, sells cupcakes and other tasty treats made by adults with varying levels of impairment from ABI. Some clients work as bakers, while others package baked goods or operate the register. They distribute locally to markets and can fulfill larger orders for parties and meetings.

“People with brain injury can learn, and we need to give space for people to learn and to thrive,” Lemoncello said.

As an undergrad at the University of Rochester, Lemoncello started out pre-med, majoring in linguistics. By his junior year, he had figured out he didn’t want to be a doctor, but it wasn’t until he found a book about health professions that he discovered speech-language pathology. When it came time to find a master’s program, Emerson spoke to him for a number of reasons.

“Critical was [now-Professor Emeritus] David Luterman and the counseling. And what stood out to me when I was researching programs was this client-centered approach that seemed really humanistic,” he said. “I went and visited and met with the late [Professor Emerita] Cindy Bartlett and just totally hit it off with Cindy. So [I thought] this is a place I think I would like to be. And hey, it’s in Boston; how cool will it be to live in Boston?”

Originally, Lemoncello thought he’d eventually work with adults with aphasia; his grandmother had had a stroke and had difficulty speaking. But his first job at a rehabilitation facility in Woburn, MA, turned his focus to adults with cognitive challenges.

His work with Luterman, an audiologist, also introduced him to invisible disability culture and ableist ideas about deafness, giving him a lens through which to view not just his profession, but also, in some ways, his identity.

While he was in grad school at Emerson, he began dating a guy with a KitchenAid mixer and cake-baking skills. Lemoncello had been cooking and baking pies since he was a kid in Florida, but cakes were a new adventure—one he continued to explore with SLP colleagues in Boston and in Oregon, where he moved to pursue his doctorate.

In his first academic job at Portland State University in 2008, Lemoncello was invited by a colleague to visit a “stroke camp” she ran, where clients could have the complete summer camp experience—hiking, fishing, swimming, campfires—and forget about their strokes for a few days.

“I said, ‘[T]his is fantastic; I love what you’re doing here,’” he recalled. “But I don’t camp, so this is not something I’m ever going to do for people with brain injury. But what do I love? I love baking.”

That idea stuck with him for a number of years, until 2016, when Lemoncello received funding to start Sarah Bellum’s. For its first two years, the bakery operated out of commissary kitchens, selling products at farmers’ markets around the Portland area, before it found a permanent home in Multnomah Village. Today, the kosher bakery cranks out roughly 48 dozen cupcakes daily, along with brownies, cookies, and even dog treats (with plenty of gluten-free and vegan options) out of its 700-square-foot storefront. There, the bakers are able to learn and maintain a process and a rhythm, and with that, a feeling of mastery and accomplishment.

“Cupcakes are easier to make than whole cakes, but it turns out it’s really a nice task to do [for people with brain injury], because it is very procedural and routine repetitive,” Lemoncello said.

As a speech-language pathologist, Lemoncello said his primary focus in opening the bakery was developing cognitive and functional skills in clients. But over the six years that Sarah Bellum’s has been in existence, he has seen something else develop in the folks who work there.

The Icing on the Cake

For most of its existence, Sarah Bellum’s has been entirely volunteer-run, but Lemoncello has been able to secure more grant funding this year, and in May 2022, the bakery launched its first “pipeline-to-paid employment” program. Currently, six bakers are earning wages as they train for up to 12 months to transition out of the bakery program and into full-time employment in the community.